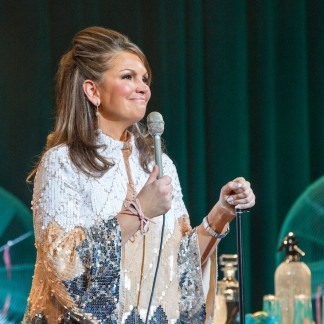 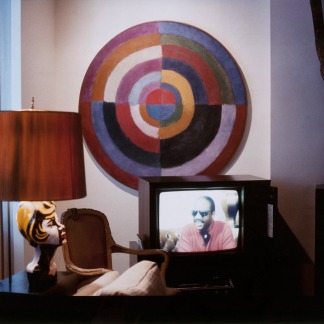 How has Lynne Koplitz been a stand-up comedian for decades and just now have her first one-hour special? With Koplitz’s first special occurring in her late 40’s, watching her show feels like your fun aunt just walked into the family reunion. “Hormonal Beast” begins with Koplitz emerging from backstage dressed in a sequin party dress into an equally chic apartment straight of the 1960s: mini bars, high chairs, circular shag rugs, and for some reason giant fans lining the sides of the stage. As she settles in she says “I feel like Barbie years later, after she sold the Dream House and she’s living in her loft. She found out that Ken is gay and she’s alright. Now she likes to be called Barbara. She let herself go a little bit.”

Koplitz is this image the entire show. She is a confident middle-aged woman who wants to impart her wisdom onto the world, giving us the run-down on everything from the three things men want (food, for women to shut the f*ck up, and sex) and how to turn the tables on a rapist.  Despite the binary she creates through epitomized gender roles, she’s going to keep you smiling for an hour straight because she is still describing relatable situations. Many of us have an unpredictable parent, especially if one of them is hormonal. Lynne describes the “Cold Cut Fiasco of 1985,” where her mother threw bologna all over the kitchen crying that her children treated her like cheap meat because they would eat all of the turkey before anything else. While she describes witnessing this event with childhood confusion, as a woman who is now the same age as her mother, she understands how small issues can build into tornado-level intensity. As real as these situations feel in the moment, you’re left cackling at the thought of a father protecting his children in the tub waiting out the mom-tornado of no-turkey rage.

I know that I do not have archives of these pieces to reference comparing stand-up comics to artists, but so far my work has taken larger funny quotes and brought it together with an artistic idea. I can’t do that this time with “Hormonal Beast.” This isn’t because Lynne Koplitz doesn’t have anything worth quoting, she is definitely a funny person, but because I became most enthralled in the image she created rather than the intricacies of her language. She says she is completely comfortable in her “Barbie turned Barbara” scenario, and this comes out in her explanation of why she likes not having children. She says, “I’m not a mom. I have nice things instead of children.” Koplitz said a woman came up to her after a show and said that she would feel selfish if she was in her 40’s and didn’t have children. Koplitz replies, “Sometimes I do feel selfish. Then I wake up at noon and look at all my nice shit.” I love this. She doesn’t take care of tiny people, rather she takes care of her stuff, which in turn is taking care of herself.

We all associate our things with ourselves, that is why we all care about what kinds of clothes we buy and take forever to pick out duvet covers and all kinds of tedious crap. When people look at our stuff they try and figure out who we are from material clues. When we look at art we see it as an extension of the artist and search their biography for clues to an image’s meaning. Take Andy Warhol, for example. You can look at his “Campbell’s Soup Cans” series on display at the Museum of Modern Art and think about the repetitiveness of the series and the uniformity that comes with marketing and advertising. Then you can consider how he would eat the same lunch, a can of Campbell’s soup, every day with his mother for twenty years; the series may become less about seriality and more about the sentimentality of this experience, the end product being a testament to these kinds of rituals. So we can look at our friend/family/stranger’s stuff and learn about who they are, we can look at artwork in a museum and learn about who the artist is, but what if artwork is displayed in someone’s house? Then there is just a calamity of person/artwork/artist/place and nothing makes sense and identities explode! Or we can calm down and think this through. Louise Lawler has.

Louise Lawler (b. 1947) is an American photographer whose work “Living Room Corner Arranged by Mr. and Mrs. Burton Tremain, Sr.” (1984) is on display in Gallery 178 in the Philadelphia Museum of Art. This photograph exemplifies a large portion of her practice photographing artwork in collectors’ homes, galleries, archives, and museums. She concerns herself with the image of artwork rather than the actual artwork itself. In “Living Room Corner,” the viewer is given a view into what feels like a small corner of a family’s home. A Robert Delaunay painting hangs on the wall behind a television and a Roy Lichtenstein lampstand.

So what is this work about: Lawler, the artists in the picture, or the Tremains? I would argue that the way Lawler frames the shot, intentionally panning out from the Delaunay painting to place other objects in the frame, is allowing us to take in the life of artwork and the ways that it is affected by its surroundings. In a museum, a viewer may consider the Delaunay piece’s formative qualities and the ways in which your eye follows the canvas in a circular motion. In the house, someone may compliment how well the canvas matches the lampshade. Lawler’s work allows us to see how art is a commodity. Warhol exposed the marketability of artwork through repetitive images, but Lawler is showing us how individualized pieces can be commodified as well.

Some might look at this photograph of the Tremains living room and think they are superficial, only collect art as a status symbol, and destabilize the meaning of art by using it in a decorative scheme. Or they could love Delaunay’s abstract style and wanted to commemorate him in their home. In either scenario, I hope sometimes they wake up at noon and look at all their nice shit.

“Living Room Corner Arranged by Mr. and Mrs. Burton Tremain, Sr.” is on display at the Philadelphia Museum of Art in Gallery 178: Word, Image & Domestic Dissent. This gallery brings together six American artists who came to prominence from the 1970s to 1990s. Their work questions identity and representation in domestic spaces, the media, art, and popular culture. Featured artists include Lawler, Barbara Kruger, Lorna Simpson, Jenny Holzer, and Carrie Mae Weems.

View all posts by artisntfunny